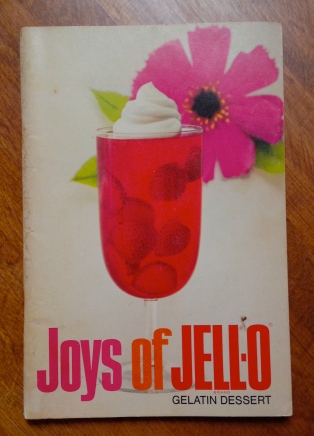 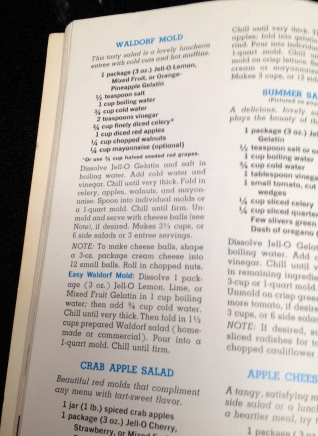 The next Jello salad on our Salute to Jell-O Salad journey is the Waldorf salad. Generally a salad that can be eaten prior to or in conjunction with a meal, suspending the ingredients in Jello allows this to become an after dinner salad treat as well. According to the Joys of Jell-O cookbook this is a “Two- way Recipe”. If serving as a desert one must consider garnishing with whipped cream, as a salad- serving it on crisp greens and topping it off with mayonnaise is preferred. 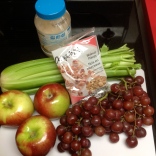 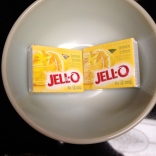 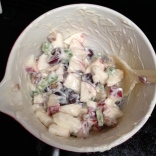 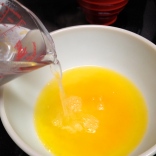 Technically this is my second attempt at this salad as the first one didn’t set properly and turned into a revolting, oozing blob.
Also, you may remember from my previous Jello post that I found that using only one box of Jello did not give the desired ingredient-mixture to Jello matrix ratio as the picture would suggest, so two boxes is what we will try this time.

My variations other than the double Jello packages ( 2 c. boiling water & 1 1/2 c. cold water) include using both grapes and celery to equal 1 cup.
Also, in my first attempt I did use the long method with the vinegar and salt, but on tasting a sample of the oozing blob, I decided that it had too much bite to it for my taste. I am working on the faith of the “tangy zip” that a “whipped salad dressing” provides instead of mayo to compensate for the absence of the  salt and vinegar. 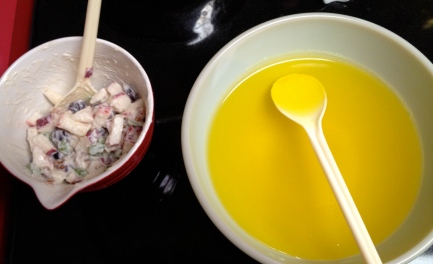 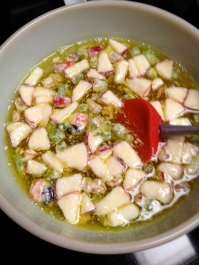 Mixing it all together.

I found that the the mayo/salad dressing separated off the fruit when mixing, leaving small white specks suspended in the Jello. 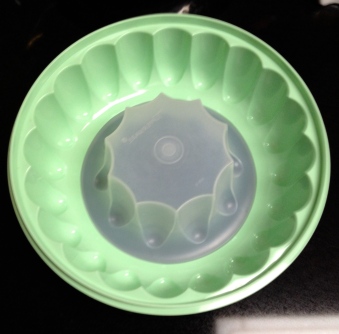 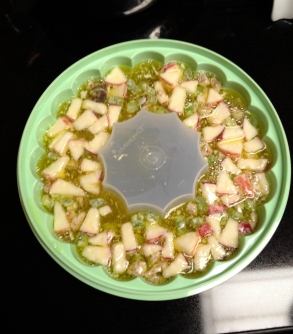 Using a Tupperware ring mold circa ~ 1980’s, the full mixture fit perfectly.
While letting the Jello set I prodded it gently to try to  keep the fruit in the centre of the mixture and spread out. Since I started folding in the fruit just a shade too soon of “very thick”, I was concerned that they would all just float to the top and there would just be a base of fruit with lemon Jello on top once it was un-molded. My concerns were not totally unfounded as I discovered that the fruit was not evenly dispersed throughout. Did my prodding help? Maybe. If I waited a smidge more, would that have helped? Maybe. At the end of the day, does it really matter? Nope. 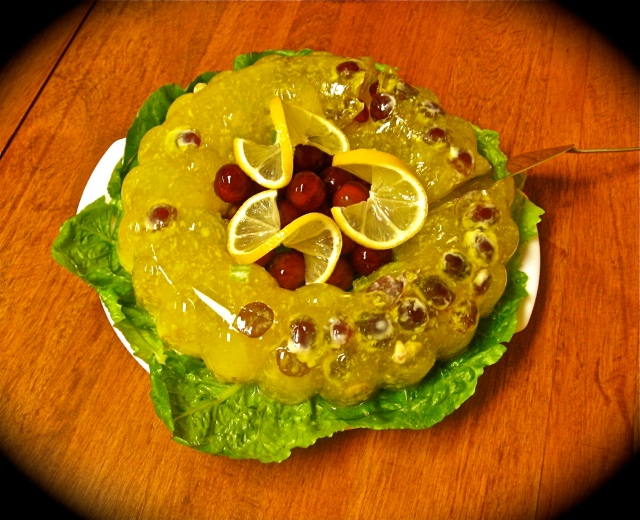 Here is the Waldorf Jello Salad in all it’s glory. I chose to garnish it with grapes and lemon, because there would’ve been too many cream cheese balls for only two people to eat. 😀

One thought on “Waldorf Jello Salad”